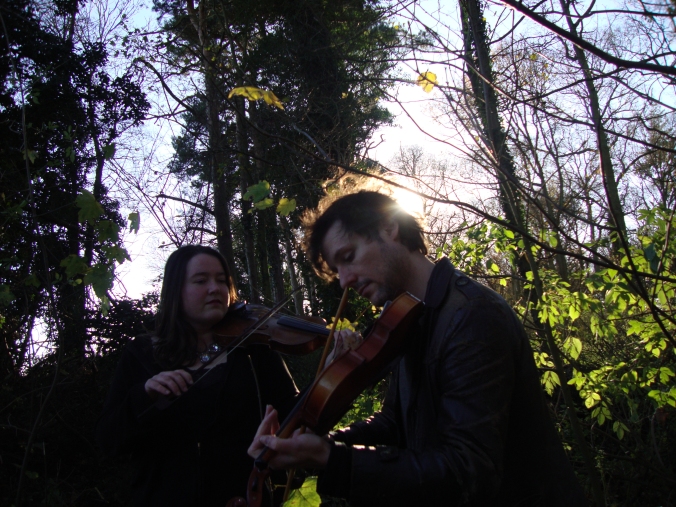 Laura Cannell and André Bosman have performed together in multiple projects over the past fifteen years, their most recent projects include touring with Cannell’s Modern Ritual Series which has taken them in their solo guises to perform throughout the UK at venues such as Liverpool Philharmonic Hall and London’s LSO St Luke’s. As a duo they have performed at Cafe Oto, Spitalfields Festival, Full of Noises, Supernormal, The Union Chapel, earlier this year they were recorded live in concert and featured on BBC Radio 3’s Late Junction.

They are both self taught on the violin, Laura brings to the duo her background in medieval, experimental and improvised music with four critically acclaimed solo albums since 2014 and regular touring in the UK and Europe, while André brings his back porch fiddle leanings influenced by his early years growing up in Kentucky, USA. His love of distorted textures, early minimalism, American primitivism, and medieval dirge also feed in to his solo aesthetics as electronic musician Hoofus.

BBC Radio 3
“Laura Cannell probes the areaswhere the ancient and the modern collide with a series of lacerating violin improvisations alongside partner André Bosman.’

Here is a short video of a recording session in early January. This performance was our first experiment with André using a small wearable amplifier to add some distorted feedback textures to our music. We’ve been given permission to use the village church for recording/rehearsing, which is handy as we like the acoustics of the building. We are the tiny figures hidden behind the pews at the end, by the way.

THE FOLKLORE OF VIOLINS
Some lovely words by Ryoko Akama about our Full of Noises Festival performance:

“The highlight of second day at the church concert was Laura Cannell and Andre Bosman, violin duo. fat texture and rich colour of musical unification. There was no borderline between noise and tuned anymore. Distortion became wonderfully accepted by our ears. Musical gesture became somehow twisted. The folklore of violins.”

“this music feels ancient, it also feels brutally alive, as if a giant was waking from long slumbers, about to make its way in the world”
THE GUARDIAN

“beguiling, mournful solemnity wreathed in power and sonority. Cannell is one of the country’s most promising musicians.”
RECORD COLLECTOR

“an essential work of modern British folk and avant-garde composition.”
THE QUIETUS